What is an inner product argument?

The inner product argument is the following construction: given the commitments (for now let’s say the hash) of two vectors a and b of size n and with entries in some field F, prove that their inner product ⟨a,b⟩ is equal to z.

There exist different variants of this inner product argument. In some versions, none of the values (a, b and z) are given, only commitments. In some other version, which is interesting to us and that I will explain here, only a is unknown.

How is that useful?

How does that translate to the inner product argument though? First, let’s see our polynomial f as a vector of coefficients:

And here’s our inner product again.

The idea behind Bootleproof-type of inner product argument

The inner product argument protocol I’m about to explain was invented by Bootle et al. It was later optimized in the Bulletproof paper (hence why we unofficially call the first paper bootleproof), and then some more in the Halo paper. It’s the later optimization that I’ll explain here.

So before I get into the weeds, what’s the high-level? Well first, what’s a naive way to prove that we know the pre-image of a hash h, the vector a, such that ⟨a,b⟩=z? We could just reveal a and let anyone verify that indeed, hashing it gives out h, and that it also verifies the equation ⟨a,b⟩=z.

Obliviously, we have to reveal a itself, which is not great. But we’ll deal with that later, trust me. What we want to tackle first here is the proof size, which is the size of the vector a. Can we do better?

So most of the proof size comes from the multiple reduction subproofs that you’ll end up creating on the way. Our proof is really a collection of miniproofs or subproofs.

One last thing before we get started: Pedersen hashing and commitments

To understand the protocol, you need to understand commitments. I’ve used hashing so far, but hashing with a hash function like SHA-3 is not great as it has no convenient mathematical structure. We need algebraic commitments, which will allow us to prove things on the committed value without revealing the value committed. Usually what we want is some homomorphic property that will allow us to either add commitments together or/and multiply them together.

For now, let’s see a simple non-hiding commitment: a Pedersen hash. To commit to a single value x simply compute:

where the discrete logarithm of G is unknown. To open the commitment, simply reveal the value x.

We can also perform multi-commitments with Pedersen hashing. For a vector of values (x1​,⋯,xk​), compute:

where each Gi​ is distinct and has an unknown discrete logarithm as well. I’ll often shorten the last formula as the inner product ⟨x,G⟩ for x=(x1​,⋯,xk​) and G=(G1​,⋯,Gk​). To reveal a commitment, simply reveal the values xi​.

which will be handy in our inner product argument protocol

Here are the settings of our protocol. Known only to the prover, is the secret vector

The rest is known to both:

For the sake of simplicity, let’s pretend that this is our problem, and we just want to halve the size of our secret vector a before revealing it. As such, we will only perform a single round of reduction. But you can also think of this step as being already the reduction of another problem twice as large.

We can picture the protocol as follows:

Does that make sense? Of course what’s interesting to us is the proof, and how the prover uses that random x.

First, the prover cuts everything in half. Then they use x to construct linear combinations of these cuts:

This is how the problem is reduced to ⟨a′,b′⟩=z′.

At this point, the prover can send a′, b′, and z′ and the verifier can check if indeed ⟨a′,b′⟩=z′. But that wouldn’t make much sense would it? Here we also want:

The verifier can compute b′ as they have everything they need to do so.

What about A′, the commitment of a′ which uses the new G′ basis. It should be the following value:

So to compute this new commitment, the verifier needs:

What about z′? Recall:

So the new inner product should be:

Similarly to A′, the verifier can recompute z′ from the previous value z and two scalar values Lz​ and Rz​ which the prover needs to provide.

So in the end, the proof has become:

We can update our previous diagram:

The HALO optimization is similar to the bulletproof optimization, but it further reduces the size of our proof, so I’ll explain that directly.

With the HALO optimization, the prover translates the problem into the following:

This is simply a commitment of a and z.

A naive proof is to reveal a and let the verifier check that it is a valid opening of the following commitment. Then, that commitment will be reduced recursively to commitments of the same form.

The whole point is that the reduction proofs will be smaller than our previous bootleproof-inspired protocol.

How does the reduction proof work? Notice that this is the new commitment:

This is simply from copy/pasting the equations from the previous section. This can be further reduced to:

And now you see that the verifier now only needs, in addition to a′, two curve points (~ 2 field elements):

this is in contrast to the 4 field elements per reduction needed without this optimization. Much better right?

At the end of a round (or the protocol) the verifier can compute the expected commitment C′ as such:

and open it by computing the following and checking it is indeed equal to C′:

For this, the verifier needs to recompute G′ and b′ by themselves, which they can as they have all the necessary information. We can update our previous diagram:

Didn’t we forget something? Oh right, we’re sending a′ in clear, a single element that will leak some information about the original vector a (as it is a linear combination of that original vector).

The simple solution is to alter our pedersen commitment to make it hiding on top of being binding:

where H is another generator we don’t know the discrete logarithm of, and r is a random scalar value generated by the prover to blind the commitment.

But wait, each L and R also leaks some! As they are also made from the original secret vector a. Remember, L=La​+Lz​U No worries, we can perform the same treatment on that curve point and blind it like so:

In order to open the final commitment, the verifier first recomputes the expected commitment as before:

then use a′ and the final blinding value r′ sent by the prover (and composed of r and all the rounds’ rL​ and rR​), as well as reconstructed G′ and b′ to open the commitment:

At this point, the protocol requires the sender to send:

But wait… one last thing. In this protocol the prover is revealing a′, and even if they were not, by revealing r′ they might allow someone to recompute a′… The HALO paper contains a generalized Schnorr protocol to open the commitment without revealing a′ nor r′. 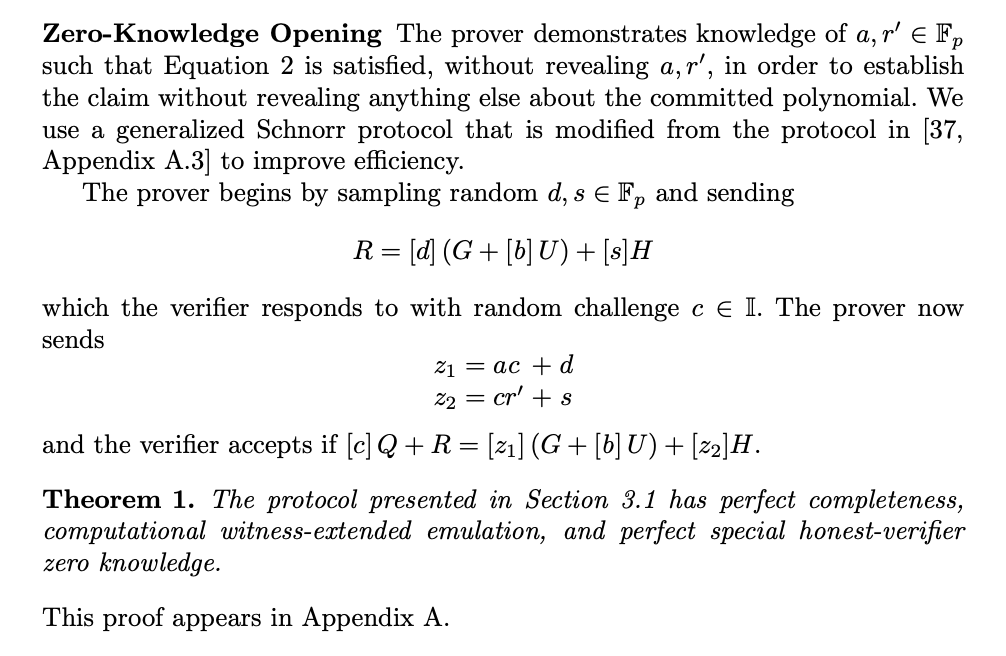 The real protocol, and a note on non-interactivity

Finally, we can look at what the real protocol end up looking at with log2​(n) rounds of reduction followed by a commitment opening.

So far the protocol was interactive, but you can make it non-interactive by simply using the Fiat-Shamir transformation. That’s all I’ll say about that.