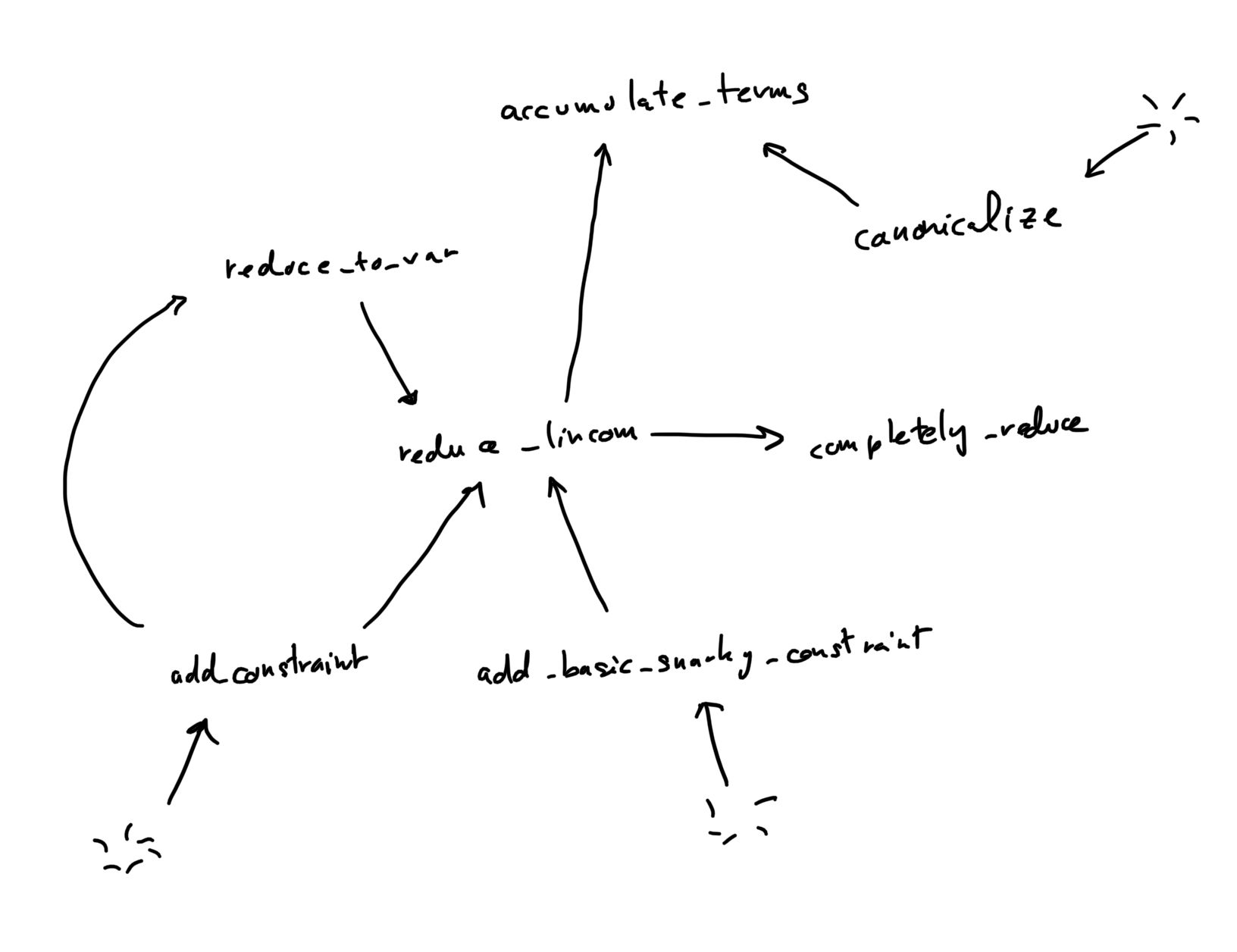 It is good to note that we’re planning on removing this abstract separation between the snarky wrapper and the constraint system.

The logic in the kimchi backend serves two purposes:

One can also perform two additional operations once the constraint system has been compiled:

A circuit is either being built, or has been contructed during a circuit generation phase:

The state of the kimchi backend looks like this:

In the backend, there’s two types of variables:

Internal variables are basically a usize pointing to a hashmap in the state.

That hashmap tells you how to compute the internal variable during witness generation: it is always a linear combination of other variables (and a constant).

During circuit generation, the snarky wrapper will make calls to the add_constraint() or add_basic_snarky_constraint function of the kimchi backend, specifying what gate to use and what variables to use in that gate.

At this point, the snarky wrapper might have some variables that are not yet tracked as such (with a counter). Rather, they are constants, or they are a combination of other variables. You can see that as a small AST representing how to compute a variable. (See the variables section for more details).

For this reason, they can hide a number of operations that haven’t been constrained yet. It is the role of the add_constrain logic to enforce that at this point constants, as well as linear combinations or scalings of variables, are encoded in the circuit. This is done by adding enough generic gates (using the reduce_lincom() or reduce_to_var() functions).

This is a remnant of an optimization targetting R1CS (in which additions are for free). An issue with this approach is the following: imagine that two circuit variables are created from the same circuit variable, imagine also that the original circuit variable contained a long AST, then both variables might end up creating the same constraints to convert that AST. Currently, snarkyjs and pickles expose a seal() function that allows you to reduce this issue, at the cost of some manual work and mental tracking on the developer. We should probably get rid of this, while making sure that we can continue to optimize generic gates (in some cases you can merge two generic gates in one (TODO: give an example of where that can happen)). Another solution is to keep track of what was reduced, and reuse previous reductions (similar to how we handle constants).

It is during this “reducing” step that internal variables (known only to the kimchi backend) are created.

The process is quite safe, as the kimchi backend cannot use the snarky wrapper variables directly (which are of type CVar). Since the expected format (see the variables section is a number (of type usize), the only way to convert a non-tracked variable (constant, or scale, or linear combination) is to reduce it (and in the process constraining its value).

Depending on the gate being used, several constraints might be added via the add_row() function which does three things:

This process happens as the circuit is “parsed” and the constraint functions of the kimchi backend are called.

This does not lead to a finalized circuit, see the next section to see how that is done.

(TODO: ideally this should happen in the same step)

Finalization of the circuit.

So far we’ve only talked about adding specific constraints to the circuit, but not about how public input are handled.

The finalization() function of the kimchi backend does the following:

Witness generation happens by taking the finalized state (in the compute_witness() function) with a callback that can be used to retrieve the values of external variables (public input and public output).

The algorithm follows these steps using the symbolic execution table we built during circuit generation:

Variables in step 3. should either:

The permutation is used to wire cells of the execution trace table (specifically, cells belonging to the first 7 columns). It is also known as “copy constraints”.

In snarky, the permutation is represented differently from kimchi, and thus needs to be converted to the kimchi’s format before a proof can be created. TODO: merge the representations

We use the permutation in ingenious ways to optimize circuits. For example, we use it to encode each constants once, and wire it to places where it is used. Another example, is that we use it to assert equality between two cells.

There’s two aspect of the implementation of the permutation, the first one is a hashmap of equivalence classes, which is used to track all the positions of a variable, the second one is making use of a union find data structure to link variables that are equivalent (we’ll talk about that after).

The two data structures are in the kimchi backend’s state:

As said previously, during circuit generation a symbolic execution trace table is created. It should look a bit like this (if there were only 3 columns and 4 rows):

The format that the permutation expects is a cycle: a list of cells where each cell is linked to the next, the last one wrapping around and linking to the first one.

For example, a cycle for the v1 variable could be:

During circuit generation, a hashmap (called equivalence_classes) is used to track all the positions (row and column) of each variable.

During finalization, all the different cycles are created by looking at all the variables existing in the hashmap.

Sometimes, we know that two variables will have equivalent values due to an assert_equal() being called to link them. Since we link two variables together, they need to be part of the same cycle, and as such we need to be able to detect that to construct correct cycles.

To do this, we use a union find data structure, which allows us to easily find the unions of equivalent variables.

When an assert_equal() is called, we link the two variables together using the union_finds data structure.